April 6, 2021
His Highness Sheikh Mohammed bin Rashid Al Maktoum, Vice President, Prime Minister and Ruler of Dubai, approved the Emirates Development Bank (EDB) Strategy to provide a sizeable AED30 billion financial support to businesses and start-ups in a major step to drive the national economy. Launched to support Operation 300 billion, the EDB Strategy aims to leverage the Bank’s role as a key driver of the national economy to provide the largest support network for the industrial sector. 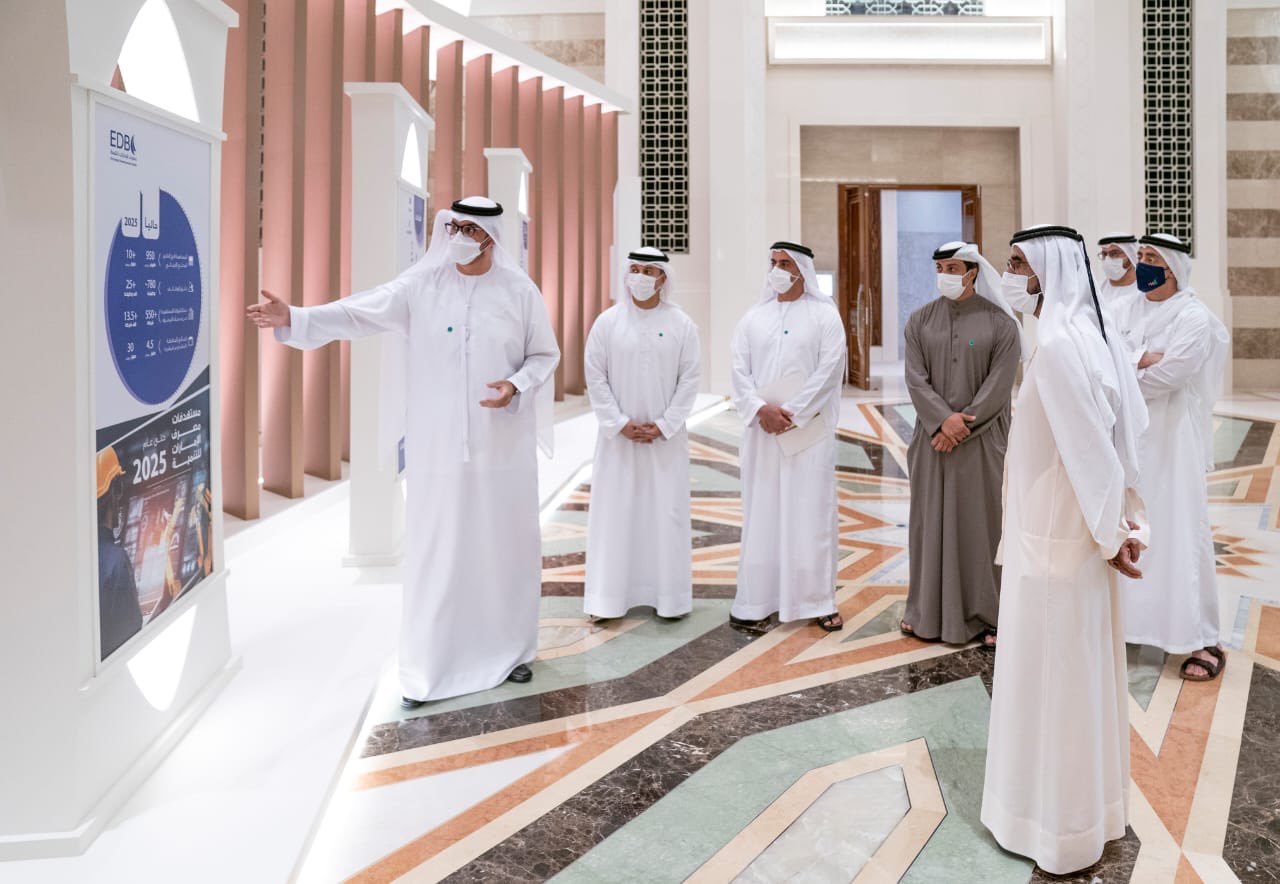 Sheikh Mohammed bin Rashid Al Maktoum said, “Advancing the national economy is a top priority that requires a joint effort of all our economic entities in the coming phase. We must adopt a distinctive vision that meets global trends and sustains development to maximize the industrial sector’s revenue and boost the broader economy. The Emirates Development Bank Strategy presents a giant leap that will leverage the bank’s role as a key driver of the national economy. Providing effective financial solutions will support the role of SMEs as main players in shaping our national economy.”

The EDB Strategy was launched in the presence of H.H. Lt. General Sheikh Saif bin Zayed Al Nahyan, Deputy Prime Minister and Minister of the Interior; H.H. Sheikh Mansour bin Zayed Al Nahyan, Deputy Prime Minister and Minister of Presidential Affairs; and H.H. Sheikh Abdullah bin Zayed Al Nahyan, Minister of Foreign Affairs and International Cooperation, among other delegates and officials.
Sheikh Mohammed bin Rashid had launched Operation 300 billion earlier in March as a 10-year comprehensive strategy to more than double the industrial sector’s contribution to the country’s GDP, positioning the UAE as a global industrial hub by 2031. Supporting Operation 300 billion Dr. Sultan Al Jaber, Minister of Industry and Advanced Technology and Chairman of EDB, presented the Bank’s strategy pillars and objectives. Under the strategy, the Bank allocated a portfolio of AED30 billion to support priority industrial sectors over a period of five years, which will contribute to financing more than 13,500 SMEs and creating 25,000 jobs.
Al Jaber noted that the launch of the strategy is based on the Bank’s role as a key driver of the national economic development that provides a large support network for the industrial sector in line with the Industrial Strategy 2021-2031 objectives.
He said, “Operation 300 billion is a comprehensive national program aimed at enhancing the contribution of the industrial sector to the UAE’s sustainable economic growth. Through close collaboration, the Ministry of Industry and Advanced Technology and the Emirates Development Bank will extend support to large corporations, SMEs and entrepreneurs across various industries including healthcare, infrastructure, food security and technology.”
Al Jaber noted that EDB will act as a critical financial engine for the national industrial strategy Operation 300 billion alongside its continued mandate to provide Emiratis with housing finance. “The new EDB strategy will help accelerate industrial development and the adoption of advanced technology through dedicated financing programs and will also provide dedicated investment funds that will support entrepreneurs, start-ups and SMEs.”
In addition to providing flexible housing solutions, EDB will complement its offering to companies and entrepreneurs with training, counseling and guidance for UAE citizens and residents. “EDB aims to cultivate a spirit of innovation, with a focus on the industries our leadership have identified as critical to the nation’s long-term sustainable growth,” he said.
The Bank will also launch an AED1 billion investment fund for start-ups and SMEs in 2022 and targeting industrial companies in priority sectors that need financing and investment. Driver of the National Economy The Strategy extends the Bank’s continuous role in advancing the national economy. Since its inception, the Bank has supported 550 companies, allocating AED1.8 billion business loans to SMEs. The Bank provided housing loans worth AED2.4 billion, besides its $750 million 5-year Senior Bond under a $5 billion program.
Share 0 FacebookTwitterPinterestEmail
previous post

Number of commercial flights in August is closer to that of 2019 – EU
September 12, 2022
Experience the future of car design with immersive gaming technology
March 8, 2022
CBUAE collaborates with SWIFT to enhance speed of cross-border payments
May 6, 2021